When it comes to automation, one of the most important tools to have is knowing how to make API calls. The PAN-OS has several different ways of doing this. In this article, I will concentrate on version 10, since it’s the latest version of the PAN-OS, and I will also be using the REST API instead of the XML API primarily, as that is my personal preference. There is one point where using the XML API is the only option and I will go into that later on.

With any process, you also need to make sure the steps are being done in the proper sequence. Applying that same principle to this article, here is what I will do:

While I could have created the Address Objects after the Address Group, I want to add the Address Objects to the Address Group at the time of creation, so they need to be created ahead of time. For more complex API calls, there will be many, many more steps than the simple example in this article, so plan ahead of time what your sequence of steps will be, what elements need to be created in what order and when to perform certain steps to make sure they are done properly and correctly so you don’t screw yourself up.

The elements I am going to create in this article are two Address Objects, called “AlphaSite” and “BetaSite,” with values of 10.241.230.1 and 10.241.231.1, respectively. The Address Group that I will create will be called “OffworldSites” and will contain both “AlphaSite” and “BetaSite.” For those who have read other articles I have written, you may recognize the references to the television show “Stargate SG-1.” Yes, this is another reference to that show.

I am also going to do something in this article that is almost never done. I will show you not only the user ID that I use, but also the password for the account and the API key that I will generate for this user.

Why am I willing to do this? The simplest reason is that this system that I am doing all of this work on is not on the internet, is not accessible by anyone outside of my home lab and will never be accessible. Additionally, as soon as this article is written, I will delete this user, negating both the password and the API key, so it truly becomes irrelevant if I share this information with you or not. Having this exact information shown and not obfuscated or blurred out may make it easier to see everything exactly as it is entered and leave no doubt as to what is being done at the command line.

I started off by creating an “Admin Role Profile” by going to Device -> Admin Roles and clicking “Add.” From here, I entered the name of “API Superuser.” Under the tab for “REST API,” I enabled every section for this role. I won’t show all of the screens as that is unnecessary, but I will show one screenshot. Here’s the first screen full of checkboxes: 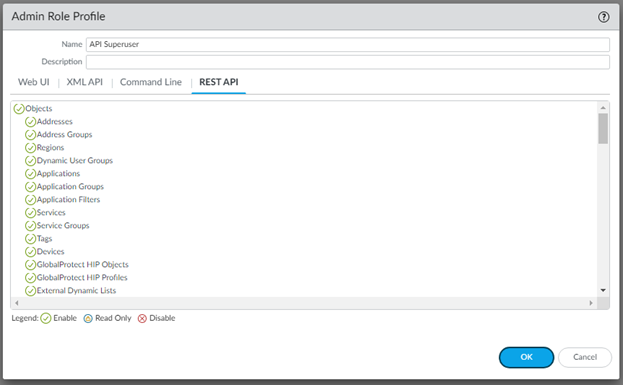 By selecting or deselecting “Objects,” you can toggle all of the selections under that hierarchy without selecting each one individually. That will save you a lot of time. But if you want to, you can also control at a very granular level how much or how little access the role has.

As mentioned earlier, there is one item under the XML API that we will need to enable as well. There is currently no way for the REST API to perform a “commit” to the firewall, so we need to enable this user to be able to make the commit via the XML API. Click on the “XML API” tab and enable “Commit.” 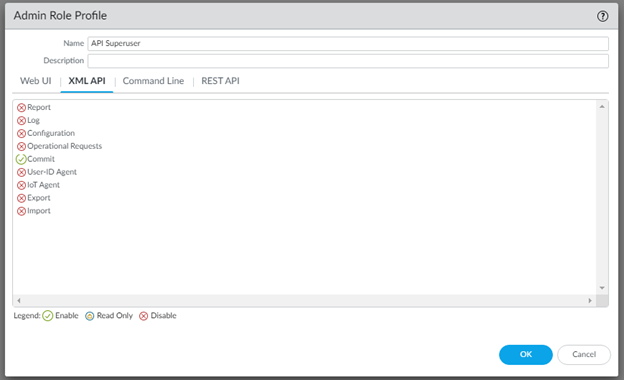 We will make an XML API call at the very end to perform the actual commit to the firewall to finish the entire process.

Next, we will create a dedicated user with JUST this access being granted from this role. They will have no access from the Web UI nor from the Command Line, which are both completely disabled in this role.

Going to Device -> Administrators, I click on “Add.” From here, I enter the following information and click “Ok” when complete:

Once this is done, I will go ahead and perform a commit to the firewall to save this Admin Role and this Administrator account.

For this article, I am using a CentOS 7 box issuing this commands at a bash prompt. These commands could be altered for a PowerShell prompt or any other type of command, but this is where I feel most comfortable for the work I am doing. Additionally, the IP address of the management interface of the PA-220 that I will work with in this example is 10.241.0.201, which we will reference several times in “curl” commands.

Lastly, I want to share that this article would not be possible without the fine work done by Palo Alto Networks and the team that maintains the documentation at https://docs.paloaltonetworks.com. All of their hard work is what has allowed me to piece together all of the information I needed to put this article together, so thank you to all of them for all that they do.

I started off with their documentation at the URL of https://docs.paloaltonetworks.com/pan-os/10-0/pan-os-panorama-api.html which also lead me to learn that all of the REST API documentation is also available locally for myself at https://10.241.0.201/restapi-doc, so I also had that information up in a separate tab.

Additionally, for those familiar with curl and wondering why I am using the “-k” parameter with it, I have used an internally generated certificate authority (CA) to self-sign my PA-220, but since the Linux host I’m working on doesn’t know about my CA, I’m using the “-k” parameter to ignore the peer’s certificate issuer. If I don’t use that parameter, I get the following error in curl:

curl: (6) Could not resolve host: GET; Unknown error

curl: (60) Peer's certificate issuer has been marked as not trusted by the user.

bundle file isn't adequate, you can specify an alternate file

the bundle, the certificate verification probably failed due to a

not match the domain name in the URL).

If you'd like to turn off curl's verification of the certificate, use

Here is the generic structure for the command we will use to generate our API key:

Replacing our settings into the above command, we will end up with the following updated command:

Putting this command into action, here is the output that I received from the PA-220 that I have. I’ve taken the XML output and formatted it to make it easier to read.

Once you get the API key back from the system, be sure to keep that safe like you would any other password. You cannot retrieve it again.

Now that we have an API key, let’s make sure it works. Here is a command that will return to us some predefined tags on the system. This is the command we will execute:

You can replace your own IP address/FQDN with what mine is to get to the same documentation.

After going through this document and many instances of trial and error, I was able to discover several pieces of information:

Here is the final easy-to-read command that I used to create the first Address Object. The “\” at the end of each line in bash/Linux is what allows the command to continue on to the next line:

By going to the PA-220’s web interface, I can look at Objects -> Addresses and see both of them listed there.

Again, using the documentation on the PA-220’s site, as well as that on docs.paloaltonetwork.com, I am able to figure out what I need to string together, so here is the command we will be using for this:

By going to the PA-220’s web interface, I can look at Objects -> Address Groups and see the group listed there, as well as both Address Objects listed under “Addresses.”

Step 5: Committing the Changes to the Firewall

Now that all of our changes are complete, we need to commit those changes to the firewall. Here is where we are going to use the XML API call for the commit, as there isn’t a REST API call to do this currently. The command is very simple and looks like this:

At this point, you can also go over to the PA-220’s web interface and click on “Tasks” in the bottom right corner of the screen and watch the job until it completes. 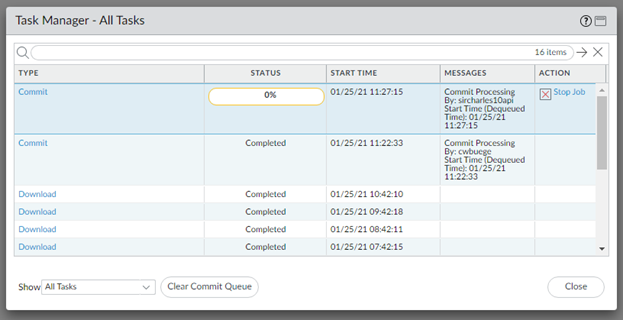 Once the currently running job completes, your changes are committed to the firewall and you can go about using those newly created Address Objects and the Address Group however you want.

As I said at the start of this article, this was purely intended as an introduction to how to use the PAN-OS API system. If I were to actually start using this system on a larger scale, there are a number of ways I would implement this. I’ll illustrate just a few of those ideas here:

Those are just a few of the ideas I’d do to extend what was introduced in this article. The realm of DevOps is extensive and growing every day, so anything that I can do to make my users’ lives easier, I try to implement as much as I can. In the end, what makes their lives easier also makes my own life easier. Learning how to use, control and access APIs is just one of many tools that has allowed me to do just that.

Charles Buege is the senior DevOps engineer for Temeda, an Industrial IoT company out of Naperville, Illinois. He currently holds a PCNSA certification and is working towards his PCNSE. He also runs an IT-based Meetup group called “The IT Crowd”.